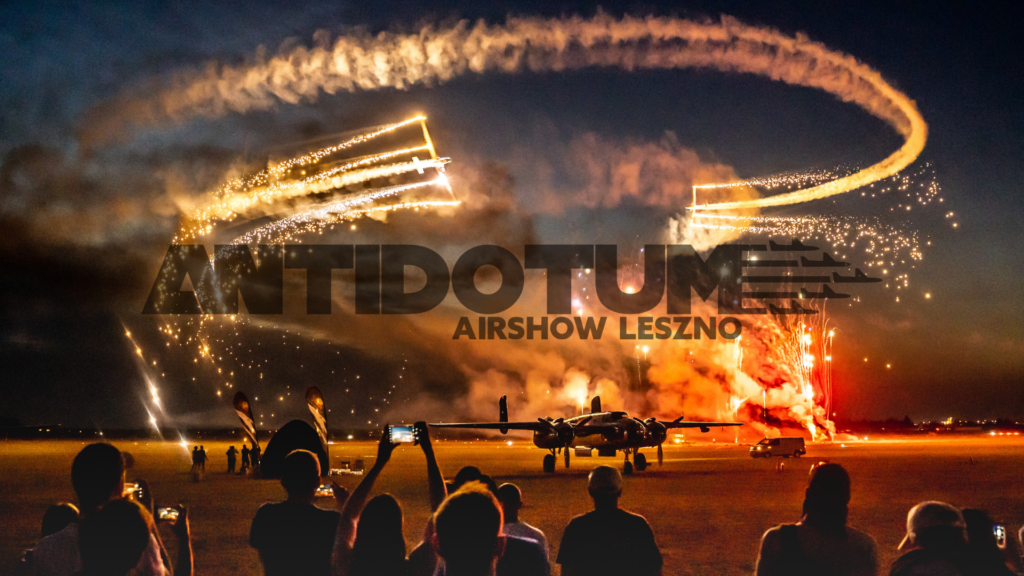 On Thursday, after 7 hours of driving, we arrived in Leszno (PL). A big Airport with 3 runways. We met Witek and his Team right in front of the Hangar. He was very nice and friendly and we were happy that we finally met each other. We took some rest and afterward we had the first briefing. Witek showed me around the area and also all the emergency landing fields.

The next day between 0700 and 0800 we had a reserved training slot and could use the time for getting a first impression of the area from above during a flight with my towing master Kornel. The first 2 training flights were really great and I could test the smoke bombs, my maneuvers, and the fast flyby with 180° Turn into the final with landing exact in front of the spectator’s area.

5p.m the big airshow began. The whole team took the shuttle bus to our hangar, where we could enjoy the show from the “first row”. I tried to get focus on my display and prepared and set up my glider. Kornel was working on his Trike. During the setup and the last discussion with Pavlo, which was the chief of takeoff, a hollow bang was caused by an F-16 which flew over our heads into the display zone. It was amazing to watch the performance. Eurofighter, C130 Hercules, RedBull Aerobatic Teams, Luca Baumann with his special Jet model plane, were following.

The time passed by so fast, and we needed to get into the launching area. 20:54 was our T/O Time. Kornel, Witek, Pavlo, Robert, Daniela, and me were quite nervous about the first launch during this big Airshow. Pavlo gave us the time and exact at 20:54 we took off. Right through the display zone into our holding area. It was kind of strange, to see all the people and the party down there and in the sky I heard just the wind and Kornel’s Trike. I don’t know if I was nervous or not, I was just focused to have a great performance.

Kornel headed back into the display zone and gave me the sign to release the line. Now everything was up to me. I had way to much altitude, so I needed to reduce the high by gaining speed and playing around. Then I ignited the smoke bombs and the show could begin.

Spinning to the right and took care to get out in direction of the runway and not too close to the spectators. Gaining Speed for Wingover and Loops. Spinning to the left and getting out in the right direction. I still had too much altitude, so there was time for improvements. Lukasz already fired the white smoke in the landing area. I performed the fast flyby with a 180° degree turn into the final. Landed….the crowd was clapping and the commentator made a great atmosphere. It was unbelievable that for the first time in front of so many people, a hang glider could perform a great show. Witek, Lukasz, and all others were already with me and helped me to secure the glider. The reason was the MI-17 Helicopter performed a great show right after me. But the downwash was incredible.

After we were back at the hangar, we had a short debriefing and everyone was more than happy, that the first show worked out that well! But no time for the party, because the same show was taking place on Saturday as well.

Saturday 1p.m, the meeting director called a briefing for all participants during the night show. Also, we, from Team Acroproject, had to come. We had to improve some parts for our night show, which we discussed in a separate team briefing.

Back at the hangar we set up and checked again our equipment till the point where the F-16 was flying again over our heads. Later, at the launching place, Kornel and Pavlo were already waiting for me. The launch was again exact at 20:54 and we could take off into the smooth air of Leszno. 270° turn into the holding. Then back into the display zone and Kornel gave me the sign for releasing the line. I could start my Display today with Lower Altitude and all that we had discussed worked out perfectly. I felt very good and during the flyby, I realized, that there were much more people than yesterday. 180° degree turn into the final.

The landing was exact in Front of the stage where Live Music was playing during my display. The atmosphere was unbelievable and every one of the Team were happy, that this time, everything was perfect. Some of them had already tears in their eyes. We couldn’t hide how happy we were. Also, more than 35.00 Spectators enjoyed it. 3 Minutes of Prime Time during such an airshow is for everyone a big achievement. Witek and his Team was working for 3 years now to be part of this show. For me, it was always a big dream to be part of an airshow like this and I feel really honored that this worked out now.

A Big thanks go out to:

Robert Bernat – Mentoring, one of the fastest rigid wings this world has

Pavlo  Mashurenko – the chief of take-off OPS and schedule coordinator

Karol Gadzinowski, Piotr Boruszewski – very, very supportive  “Tajwanski Zab” hangar owners, our logistics was on another level thanks to their hospitality

Daniela Herz – Assistance and great support during this great weekend.

and finally to the whole ANTIDOTUM Team in Leszno. Many thanks for the invitation to this great event, the great organization, and their hospitality.

We felt amazing good and went back home on Sunday with a big bag filled with new friends and a lot of great people we met, a lot of new and unforgettable experiences, and of course a lot of work 😉

THANKS TO ALL FOR THIS GREAT WEEKEND….a Dream came true.